Yes, some trains do have what looks like a steering wheel, but the truth is that the wheel is not used for steering.

There is a big misconception about this Notch Changer also known as Tap Changer (Speed adjuster) because it does look like a steering wheel.

So what does a train steering wheel accomplish?

As mentioned above, the tiny wheel you’ve seen is used for adjusting the speed for certain trains ( locomotives/engines).

The Tap Changer (Train Steering Wheel) is used mainly on Indian and European electric locomotives, chances that you’ll see one on the North American locomotives (trains) are slim.

How does a train steering wheel work?

The so called steering wheel works as a throttle, if you rotate it clockwise more current will be fed into the locomotive traction motors. It usually has 30-32 positions, think like the higher the position of the steering wheel (rotated clockwise) the greater the speed of the train.

If is spin counterclockwise the speed will decrease and brakes will be applied.

It has to be mentioned that this steering wheel system is not used on modern locomotives, it has been replaced with a throttle lever.

What are some examples of trains that have a steering wheel?

Many Indian locomotives run with the so called steering wheel concept, a good example would be the WAP4, WAM3, WAG5 and WAG7. 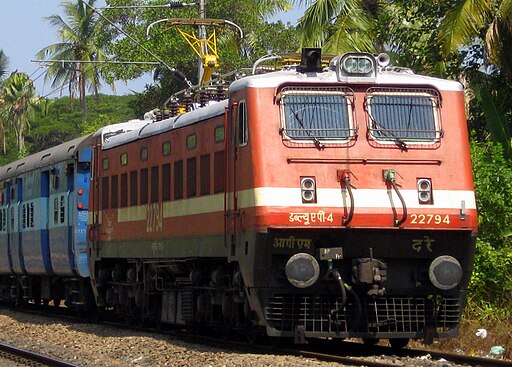 Are there any other uses for the steering wheel on trains?

In some trolleys also known as streetcars (trams in Europe, a rail vehicle that runs on tramway tracks), the steering wheel is used as a brake wheel, and in some trains it is used as a handbrake.